Expressing Creativity Through Music After Stroke

Music lights up the whole brain, “like the sky during a fireworks display,” said Kyle Wilhelm, MA, MTBC in the Music Therapy Services department of West Music. This seems to bring delight as the Aphasia Tones choir, the Chime Strokers and singer Toni Hickman experience firsthand.

Music is always an important part of Retreat & Refresh Stroke Camps, which are held all over the country. A music therapist is hired for each camp and leads singing, drum circles and instrument playing during the camp weekend. During 2010, several music therapists at the Peoria camps brought hand chimes, which allowed campers to make beautiful music with little effort. “Hand chimes are a perfect instrument for survivors, since you only need one hand to play it,” said Lauren Kramer, a music therapist and director of operations for Retreat & Refresh Stroke Camps. The campers loved them, and some suggested forming a chime choir in the Peoria area. 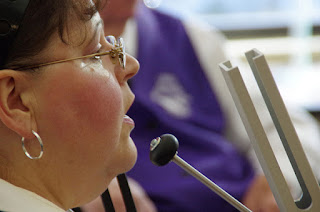 Several campers even committed themselves to being in the choir! After raising enough money to buy a set of chimes, which cost over $1,000, the group officially began practicing on Tuesday nights.

That fall of 2010, the choir met a few times and played at a camp fundraiser in October. And the Chime Strokers, a tone chime choir, was born.

The original plan was for the choir to comprise only survivors, but at their first performance they needed more hands and some caregivers were recruited. “Now those caregivers really love playing with the group,” Kramer said.
When the Chime Strokers started, there were two directors, “and we would just point to the person when it was their turn to chime,” Kramer said. When one of the directors relocated, Kramer started using flipcharts, with chords denoted by colors and notes by letters. Kramer points to the chart and the chimers are responsible for following along and playing at the appropriate times. The method is therapeutic for the survivors because it helps with their motor planning, hand-eye coordination and focus.
There are a dozen Chime Strokers plus a couple of alternates. They play 10-12 performances each year at hospitals, churches, nursing homes and networking luncheons.
“The Chimers have brought Bob closer to normal,” said caregiver Ruthanne Scott, whose husband is a member. “He can talk now thanks to the connection in the brain between speech and music, and we have made the best friends as a result of the group. These people have become our life now. He loves playing in the group.”
The Chime Strokers perform a song called Let Me Do that was inspired when breakout groups at Stroke Camp responded to the question ‘what do you want others to know about you and recovery’ — their honest responses were later put to music and Let Me Do has become the group’s signature song.

There are a dozen Chime Strokers plus a couple of alternates. They play 10-12 performances each year at hospitals, churches, nursing homes and networking luncheons.
To see their video go to youtube: https://youtu.be/47S16-yeydg