Dancing with Stroke
By Jim Sinclair

Little did I think during my career as an educator and counselor that the greatest educational challenge during my lifetime would be after my stroke. I had to be re-educated in terms of all those things that I could no longer do or had great difficulty doing following my strokes. If memory serves me correctly my re-education began with my speech. Shortly after my strokes I learned that while I was considered to be somewhat aphasiac my bigger issue was the paralysis present in the left side of my face, mouth, tongue, and throat.

The paralysis not only affected my speech, it impacted my ability to chew and swallow and contributed to issues such as biting my tongue and inner cheeks. That part of my education, which was the start of my rehabilitation and recovery, began with tongue and lip exercises. As the paralysis began to subside somewhat I was promoted to exercises involving letters and words. The letters B and P became my first challenge.

Once I could reasonably pronounce the B’s I was given words beginning with B to practice repeatedly. At this point ten years later I don’t recall the words or phrases; I only recall that I enjoyed making the B sounds and would lie in bed making B sounds while wondering why someone with three university degrees would be forced to making baby sounds.

I believe that this is when I learned that if I was going to progress I would have to be prepared to do whatever was required of me, no matter how disagreeable. It seemed that I was working on saying P’s forever. Clearly the strategy of learning though repetition was employed when I was required to persistently say “People in Pittsburgh are polite.” While I grew to detest the phrase I continued saying it repeatedly throughout my three month hospital stay since the last paralysis to leave was in the left side of my face and mouth.

This experience has proven to be of unexpected value. In my roles as a Stroke Survivor Peer Support Volunteer, I occasionally make oral presentations to groups. In discussing how well I have progressed I can refer to my People in Pittsburgh are Polite experience and explain that I no longer have problems with my P- P- P’s except for my lack of Patience. My problems are now with my F-F-F’s. When I do Foolish things, I get Frustrated. I frustrate my wife, and a flurry of fowl four letter obscenities flows forth from my mouth.

As I become aware of this after the fact, I do make attempts to subdue my verbal reactions when I realize that I am becoming frustrated. Once I returned home my speech was very low and monotone, so I had to teach myself to project and enunciate so as to be heard properly. As with a great many stroke survivors much of my time in the rehabilitation hospital was dedicated to learning to walk again. While I had been discharged from hospital with a wheelchair and a walker I could walk a little with someone attending to my belt.

I didn’t realize when I first returned home that I had only learned how to sit down and stand up using a wheelchair, which meant that I could only use regular chairs with arms. It was at this point that I learned that following a stroke a survivor may be unaware of certain things that they are unable to do until they are unsuccessful in their attempts. This realization was quickly reinforced when my wife handed me a remote control and asked me to turn on the television.

It looked somewhat familiar but I had absolutely no idea what to do with it and just sat there confused. This set in motion my re-education of all things technological. Once I had mastered the functioning of the remote, my youngest son, who was living with us, took up the challenge of re-introducing me to the computer. My first session was much like my remote control experience in that I stared blankly at the screen feeling that it was somewhat familiar.

I had absolutely no idea what to do until my son showed me the power button. He explained that I first needed to turn it on. Having had my Driver’s License suspended solely on the basis of a doctor’s report of hospital observations, I was convinced that if given an opportunity I could demonstrate that I still had the ability to drive. Once I was given authorization to initiate the process to re-acquire my License I was able to pass the written portion of the exam.

I did so by dedicated repetitive studying of the material. During the road portion of the exam I had no idea that I had lost the ability to drive until the Driving examiner reached across to take control of the car. Once I completed a series of driving lessons, I successfully passed the road test. It wasn’t until after three years of driving that I realized that there was something not quite right with my driving. I quit driving for two years while I worked on improving my focus and concentration to the point that when I drive my entire focus is on my driving.

Much of my time during the first few years following my strokes was dedicated to re-learning many of the very little things that I didn’t realize I was unable to do until I had occasion to try. Slowly over time there became less and less that I needed to relearn. Two and a half years ago, I had my first post stroke opportunity to walk barefoot on a sand beach and discovered that I was unable to do so without almost falling over. I was confident that given time I could re-learn how to walk barefoot in the sand.

Once I learned that I could manage the same walks if I wore my sandals I felt there was no reason to work at walking barefoot. My most recent post stroke learning relates to my struggle with F’s as previously noted. Recently feeling that I should probably do something about the 4 letter F words that will occasionally be part of my speech, I believe that I have learned something new.


Growing with Acceptance
By Jeanette Davidson

Initially, in the early days after my stroke, I felt like I LOST so much of myself and my capabilities. I couldn't read, I couldn't write, I couldn't use the computer, cook a meal, or do laundry. Most importantly, I couldn't think or process information. Working was not an option. I felt like I deserted 90 of my bereavement clients from my job at Hospice. They were grieving the loss of a loved one and now they lost me, their therapist. So I was not only dealing with the loss of my health, but the loss of my career. On a few occasions, I would cover the surface of my nightstand with piles of tear filled tissues. I was stunned, shook, frightened. Anxiety was my core driver as I would wallow in self-pity and doubt.

I barely allowed myself space to grieve, because I felt so afraid that if I met my grief head on it would envelop me entirely. I felt like I went from 49 years old to 70 years old overnight.

Then as time progressed, little by little, I saw my attitude changing. I began to love having the mornings to relax and sip tea on my patio without having to rush off to work. I started writing a daily gratitude journal, documenting all the little things in my life that brought me joy. Living in the present moment became something I cherished. I found myself having time to listen and have quality time with the people who mattered the most to me. I had perspective, empathy, and love that I wanted to share with others. My stroke began to take on a different meaning. It no longer defined me. I made this list as a reminder to myself of all the things I now can do since my stroke.

So eventually, my life became not about all the things that I had lost, but all the things that I had GAINED, deep within myself. I gradually learned that letting go is really about accepting the truth of what has happened. Once I was able to accept, many of the gifts of my stroke began to follow. I believe that illnesses and challenges show up in our lives to remind us to love and live more fully. There are always challenges we still continue to face, but on most days I focus on the gains and count my blessing as I begin each new day with hope and gratitude.

I wish you the same!

Guidelines for Interacting with a Stroke Survivor

Treat me the same way as you did before my stroke – I am the same person.

Common impairments for stroke survivors are: Vision, balance, speech, hearing, and paralyzed on one side.

Some stroke survivors have difficulty communicating verbally as well as reading, writing, spelling, and understanding what is being said, this is called aphasia.

Our brains have been rewired which affects our communication. So, we need you to: Give us enough time to respond. Talk slowly; offer at times to repeat yourself. Be patient when trying to communicate with us. It is okay to help us find a word when we are having trouble.

There are other ways of communication besides words: gestures, facial expressions, body language, pictures, pen & paper.

Treat us like adults and not children. Speak directly to us, not our spouse or friend. Don’t talk like the stroke survivor isn’t there.

Listen for my speech, is it slurred or am I saying words that makes no sense.

Give the stroke survivor a chance to be independent. Ask before you help them. Follow his/her instructions for initiating the help.

Many stroke survivors have problems with balance. A rough pat on my back, shoulder, or arm can easily set us off balance and can hurt me.

Be gentle and understand that it can take a lot of concentration to walk, especially on uneven surfaces.

When we are tired and/or frustrated, ALL of our basic skills (i.e. talking, walking, handwriting, and concentration) diminish. If we are more agitated than usual, we are probably tired or frustrated! Have patience and encourage us.
No comments:

Recruting for the Fall 2020 RFUMS Neuro Balance Clinics now! Please share this with clinicians and people who may be interested. 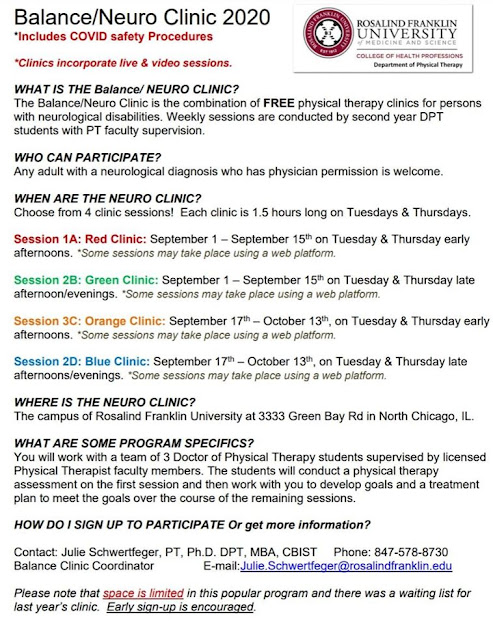