A Nurse and a Stroke Survivor

Teri Ackerson is a stroke survivor. Before her stroke she was a Stroke Coordinator at her local hospital. In addition to being on the AHA’s Kansas City board of directors, Teri is also a member of the National Board of Directors of our United Stroke Alliance organization. Because she acted FAST and was treated with the tPA clot busting drug she has very few deficits that are caused by a stroke.-------------------------------------
By AMERICAN HEART ASSOCIATION NEWS
news.heart.org 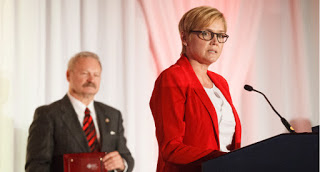 Teri Ackerson vividly recalls the 1 a.m. call from a friend who was urgently trying to figure out whether someone was having a stroke.

As a nurse who has herself survived a stroke and now works to make sure people get proper stroke treatment, people who know Ackerson trust her expertise. And, thankfully, Ackerson was able to help early that morning by advising emergency treatment.

“You helped me save a life tonight; if it weren’t for you, I wouldn’t have known,” she recalls her friend saying.

Ackerson was recently honored with the American Heart Association’s Healthcare Volunteer of the Year award in Dallas. She’s passionate about stroke education, and is making a difference locally, nationally and even internationally advocating to help stroke patients get the best care.

Ackerson has worked with patients in Kansas City, Missouri, since 2009. But her dedication took on a new intensity after her own stroke three years ago.

“A stroke takes away your independence and it paralyzes you with fear,” said Ackerson, a critical care nurse who’s also on the AHA’s Kansas City board of directors and helps ensure healthcare professionals have the most up-to-date stroke research and education.

Her stroke happened while she was on a coffee run with her teenage son Parker.

She was treated with the clot-busting drug tPA, which improves blood flow to the brain following a stroke. Outpatient therapy followed for six months.

At the time, she was working as a stroke coordinator at a local hospital.

“I wish I could tell you that my stroke didn’t change how I practice medicine, but it’s a huge eye-opener when you’re on the other side of the door,” Ackerson said. “I advocated for patients in the throes of stroke much more than before. I became more aggressive with the emergency department professionals, so it wasn’t as easy to exclude patients from treatment. We pursued and asked and answered so our patients could get tPA if they needed it.”

All because she’d walked in their shoes.

She tells patients: “‘I’ve laid in this bed. I’m a stroke survivor too, and we’re going to get through this together.’”

“Patients will tell you, ‘OK, you saved my life, but where’s the quality of it?’” Ackerson said. “If we can correct how we treat on the front end, we can have them walking out of the hospital versus going through a skilled nursing facility.”

“I started cooking a lot because I had to engage both of my hands. It was well past 11 at night, and I was making lemon-lavender cupcakes for the neighbors in my cul-de-sac,” she said.

The eggs, the flour, the ability to follow directions all came together. But would she remember the next day? That’s what she wanted to know.

She went to bed and was relieved when she woke up.

“Everything was pretty much still connected the next day,” said Ackerson, who continued her baking therapy. “My neighbors used to tease me: ‘You had a stroke and we’ve gained 10 pounds.’”

Ackerson feels fortunate that her recovery was relatively fast — so fast that she ran a marathon 26 days after her stroke. That’s not the case for all survivors. She once worked with a chemical engineer who spoke six languages but couldn’t use his right arm or speak after his stroke.

Her stroke made a lasting impact on Parker, now a college student who volunteers to spread awareness with his mom.