Stent retrievers are a game-changer for severe strokes

By 2015, stroke experts were starting to agree on the benefits of using tiny, cage-like stent retrievers to remove clots from large vessels that block blood flow in the brain. Today, the consensus for that treatment has become universal, thanks to an analysis of patient data from five landmark trials.

“Since publication of the paper, there is no doubt left around the world that this treatment is a major leap forward for treating acute ischemic stroke due to large vessel occlusions,” said Mayank Goyal, M.D., the study’s lead author. “The national guidelines all around the world have changed. Whether you go to Spain or South Korea or Argentina, the treatment is here to stay.”

The meta-analysis, published last April in The Lancet, was selected as one of the American Heart Association’s top 10 heart and stroke science advances of 2016 for its detailed look at five groundbreaking studies published in The New England Journal of Medicine: SWIFT PRIME, MR CLEAN, ESCAPE, EXTEND-IA and REVASCAT.

Stroke is the fifth-leading cause of death in the United States. Of the estimated 795,000 Americans who have a stroke each year, it kills nearly 129,000 of them. About 87 percent of all strokes are ischemic strokes, which occur when blood to the brain is blocked.

Ischemic strokes can be treated with tPA, a clot-busting medicine that must be given within three to 4.5 hours after the start of stroke symptoms to be effective. But tPA doesn’t completely dissolve blood clots in larger arteries.

The stent retriever procedure, called an endovascular thrombectomy, “clearly improves the outcomes of many patients who are having devastating strokes,” said José Biller, M.D., professor and chair of neurology at the Loyola University Chicago Stritch School of Medicine. Biller, who was not involved in The Lancet research, helped write AHA’s 2015 stroke treatment guidelines urging medical practitioners to use stent retrievers.

“The findings are consistent across the board,” Biller said. “They unequivocally change the paradigm of how we approach these patients, and we’re talking about big numbers … 85 to 87 percent of strokes are ischemic strokes, and 15 to 25 percent of those are due to large artery occlusive disease.”

The number of stent thrombectomies performed in the United States has risen rapidly since the first of the five landmark studies was released in December 2014 and guidelines were updated six months later, shows a study presented in February at the AHA’s International Stroke Conference.

The study of nearly 1,000 U.S. hospitals showed that the average number of stroke patients receiving the stent retriever procedure at each hospital more than doubled, from 25 patients per year in 2014 to about 53 patients in 2016. 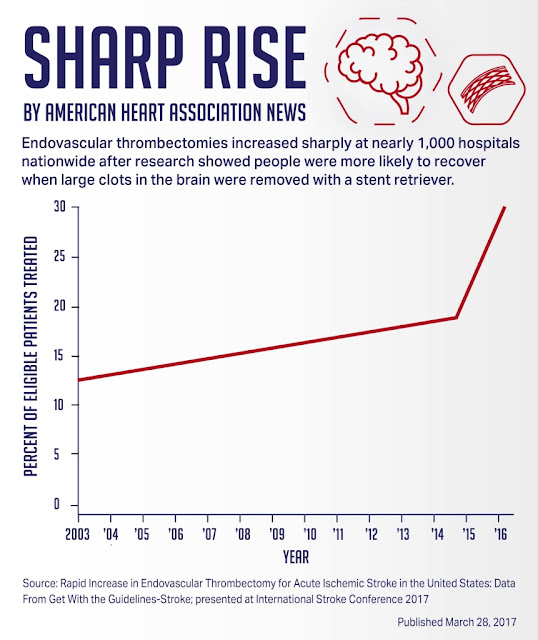 The meta-analysis in The Lancet pooled data from 1,287 patients in five studies to see if stent thrombectomies were successful across a diverse population. The study concluded patients benefited regardless of age, stroke severity and whether they received tPA.

One limitation of the analysis, according to Goyal, was that “each study had slightly different criteria for patients, but the bottom line is the criteria was relatively similar to each other.”

As far as medical complications from the procedure, which requires doctors to thread a catheter through an artery in the groin up to the blocked artery in the brain, “the paper shows there was no significant additional risk to the patient,” Goyal said.

According to the AHA, stroke cost the nation $71.6 billion in related medical expenses in 2012, and that cost is expected to triple by 2030. Each endovascular thrombectomy costs about $14,000 and is covered by Medicare, Medicaid and most private insurers.

“Studies show the treatment is cost-effective,” said Goyal. “You spend money up front, but because the patient has a better outcome, they require less rehab and less services later on.”

Goyal said he expects stent thrombectomy treatment to improve in the coming years. “Stent retrievers are a good, well-tested technique, but with new innovations, it’s quite possible that three years from now we may be treating patients differently, with even better techniques,” he said.

For the time being, Biller said, it’s important to educate the public and the medical community about the need to get stroke victims to the right hospital — one with a stroke center — as quickly as possible so they’re able to have a stent thrombectomy if they need one.

HEALTH CARE DISCLAIMER: This site and its services do not constitute the practice of medical advice, diagnosis or treatment. Always talk to your healthcare provider for diagnosis and treatment, including your specific medical needs. If you have or suspect that you have a medical problem or condition, please contact a qualified health care professional immediately. If you are in the United States and experiencing a medical emergency, call 911.