Finding a voice after massive stroke

a division of United Stroke Alliance

Finding a voice after massive stroke at 29

Meredith Gorham was finally relaxing after a busy, hot day of running around on July 17, 2009. But when she tried to stand up from the couch, she suddenly collapsed.

Her shocked husband, Chris, tried to help her up. But after realizing she was unable to stand, he quickly called 911 and Meredith’s parents, who live nearby in Greensboro, North Carolina.

Meredith couldn’t see what was happening. But she remembers feeling “eerily calm” as she listened to the commotion that followed moments later.

“I could hear all the walkie talkies and all I could think was, ‘Do not wake up my kids,’” she said. Asleep in their rooms were her three young boys who were 4 months, 2 and 4 at the time.

Meredith soon lost consciousness and was rushed to the hospital. She had a massive stroke that required a four-hour surgery to remove the clot. The severity of the stroke, which doctors said affected a third of Meredith’s brain, meant that she might wake up unable to move or communicate.

The next few days were devastating for the family.

“I remember coming home and putting all the kids in bed with me and just hunkering down,” Chris said. “I just couldn’t believe what was happening.”
When doctors began bringing Meredith out of a medically induced coma a few days later, she had a surprising amount of sensation in her limbs, and even tried to get out of bed that night.

“The doctors kept looking at her chart and being surprised at what she could do,” Chris said. “They still call her their ‘little miracle.’” 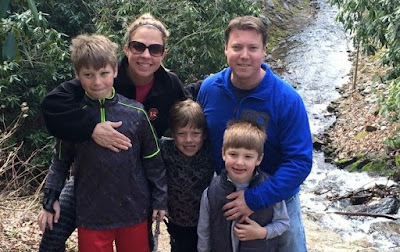 Meredith’s stroke was caused when a blood clot traveled through an undiagnosed hole in her heart called a patent foramen ovale, or PFO. All babies are born with a hole between the two upper chambers of the heart, but the hole normally closes shortly after birth.

But it remains open in about one in four people. While PFOs don’t pose a problem for the vast majority of people who have them, they can create an escape route for tiny blood clots that would ordinarily get filtered out by tiny capillaries in the lungs.

For Meredith, a clot traveled through the hole and up to the brain, causing a stroke. Doctors used a mesh material to help close the PFO a few months later.

Meredith’s recovery was difficult, requiring her to sleep for as many as 20 hours a day as her brain healed.

Coordination on her right side was limited, and Meredith had to learn how to do everything with her left side to manage daily tasks. For nearly nine months, though, she was limited to a few words.

She also struggled with aphasia, a condition affecting at least 15 percent of stroke survivors in which the brain has difficulty processing language.

“It was about a year and a half before we could have a regular conversation,” Chris said. “It was just frustrating because she couldn’t get out what she wanted to say.”

Normally outgoing, Meredith became uncomfortable in groups, unable to participate in fast-paced conversations, something she continues to struggle with at times.

“I would just freeze up because I couldn’t think of what to say,” she said. “I’m slowly getting back to being an extrovert, but in a new way because of what I’ve been through.”

The stroke also took an emotional toll. A year and a half after the stroke, Meredith became depressed. She and Chris eventually sought therapy, taking two years for her to accept what had happened.

“I tried to ball it up inside, because what happened was so scary,” she said. “I can’t help that I had a stroke, but I just decided I wanted to move on with my life.”

The rest of the family had to adjust as well, with the couple’s young kids taking more responsibility for household tasks, Chris said.

“We all had to work together more, and get frustrated together and lean on each other,” he said. “There are parts of Meredith we’ll never get back, but we feel blessed for what we have.” 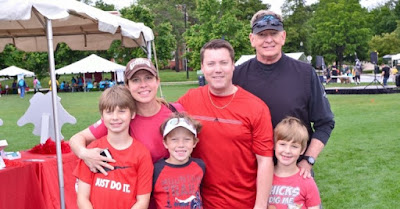 Meredith also found support from other stroke survivors she met while volunteering with the local American Heart Association.

“It was such a relief to know other people who knew what I’ve been through,” she said.

Now 37, Meredith still experiences pain and involuntary movements in her right hand and foot, and still requires extra rest to avoid getting overly fatigued. Even so, she plays on a co-ed soccer team and runs regularly.