United Stroke Alliance in partnership with Medtronic launched a new resource for Stroke Support Groups called The Booster Box. Included in the box is everything a leader needs to conduct a support group meeting for up to 24 attendees.

To receive your free Booster Box please call our office at
309-688-5450 or email info@strokecamp.org to request yours.

Subscriptions will be available for purchase and information will be inside your free box.

Stroke Support Group Finder Link
*****************************************************************
This article is from a recent AHA newsletter: https://www.heart.org.
Mr. Michael Johnson and AHA's Nancy Brown want you to think fast, and we here at United Stroke Alliance (not affiliated with AHA, but have the same objectives concerning stroke) have always promoted FAST through our 5th grade education program, major league baseball program (Strike Out Stroke) and our nation wide weekend retreats for stroke survivors and caregivers (Retreat & Refresh Stroke Camp). We have noticed that while people understand the symptoms described in the acronyms F.A.S.T. they are not responding quick enough to the T - Time acronym. In an effort to promote the seriousness of time we are adding a little more to make the acronyms spell B.E.F.A.S.T.E.R.

These two our stroke teams are noticing:
B - Balance (Sudden loss of balance)
E - Eyes (Sudden blurry or loss of vision)

The next four you will learn from Nancy Brown's article.
F - Face
A - Arms
S - Speech
T - Time

We think more emphasis is needed here:
E.R. - Emergency Room
(Get to the ER by ambulance they know what to do FASTER!) 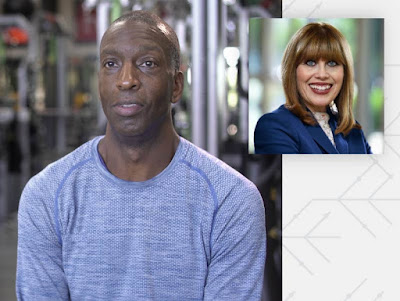 Track legend Michael Johnson was slowed by a stroke in 2018.
Michael Johnson's quick reaction to his stroke was a big reason for his stellar recovery. AHA CEO Nancy Brown shares Michael’s story in her latest column.

When you think of track and field legend Michael Johnson, several things probably come to mind.
There's Olympic greatness, as evidenced by his four gold medals.

There's the flair he showed at the 1996 Games in Atlanta, wearing gold shoes on his way to a world record at 200 meters and an Olympic record in the 400 meters.

And there's the nickname he earned for being so dominant for so long: "Superman."

But if searching for a single word to describe all of the above, a fitting label would be "fast."

May is American Stroke Month, a time to pay closer attention to the No. 5 killer of Americans and a leading cause of adult disability.

My organization – the American Heart Association, which includes the American Stroke Association – uses the occasion to boost awareness of the warning signs of a stroke. If you see someone experiencing face drooping, arm weakness or speech difficulty, then it's time to call 911. The acronym that helps you remember this is F.A.S.T. 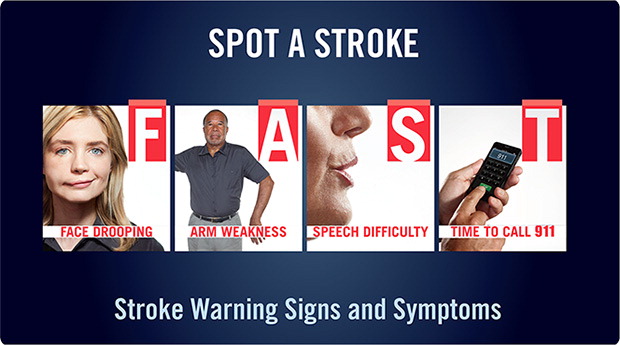 A speedy response can change the outcome. The sooner care is given, the better the recovery chances. The phrase doctors often use is "time lost can be brain lost."

Here's how these threads tie together: Johnson recently became a stroke survivor.

On Aug. 31, 2018, after a workout at his home, Johnson's left side became weak. Instead of viewing himself as invincible, he sought immediate treatment. Doctors told him that his quick response is a key reason for his nearly full recovery.

Johnson is sharing his story because he understands the many ways it can resonate. The most profound is perhaps the most obvious: Connecting this fast guy with F.A.S.T. offers another way to remember this potentially lifesaving information.

"I've known for a very long time that I have the ability to impact other people with my platform and what I've accomplished," Johnson said. "So this being another wrinkle in the story of my life and being a part of who I am, it wouldn't seem normal for me not to share this and try to use it where there needs to be more awareness about prevention and what to do if you are so unfortunate to have a stroke."

Johnson's tale began following a workout at his home in Malibu, California. His left foot felt strange, then his left arm tingled. When it twitched, he began seeking answers.

At the UCLA Medical Center in Santa Monica, an MRI revealed that a blood clot had settled into the base of his brain on the right side, preventing blood flow long enough to cause damage, then dissolved. What remained were the questions of if, when and how much he'd recover.

Johnson's problems were mostly with his arms and legs. He had to rest for two days before beginning rehab. With his speech and mind unharmed, he spent his downtime pondering questions such as:
"What's next? Could it be that I'm never going to walk again?"
"I'm 50 years old, I'm in great shape, I'm doing all the right things. How did I have a stroke? Why did I have a stroke?"
"OK, what was I doing? What did I do that day? Did I cause this?"
"I can't get dressed by myself, I can't go to the bathroom by myself. … Is this my future? Is this the rest of my life?"

Rehab began with Johnson walking around his hospital floor with the aid of a physical therapist and a walker. Johnson realized they went about 200 meters.

His record-shattering 200-meter race in Atlanta lasted 19.32 seconds. This trip took about 10 minutes.

Yet Johnson came away encouraged. For someone whose career focus was improving by tenths of a second, the incremental improvements during that outing gave him confidence that he'd recover.

Six weeks later, his wife could hardly detect a limp. By February, Johnson considered his stride reasonably close to where it was pre-stroke.

Some numbness lingers in his left hand and left foot. Feeling may never return to those spots.

Another unknown is the source of his stroke. Extensive testing never found a cause. His stroke was thus labeled "cryptogenic," which happens in one of every three strokes.

Johnson isn't worried about another stroke. He's controlling what he can, which means following doctor's orders such as continuing to exercise, eating a healthy diet and trying to reduce stress.

"I've been fortunate to always have been in a really good life and I enjoy life," he said. "I get to do the things that I enjoy and be around the people that I want to be around and do the kind of work that brings me joy."

These days – and especially this month – his joy also comes from spreading the word that anyone can have a stroke, and from sharing the warning signs.

In case you're wondering, Johnson didn't know the acronym before his ordeal. Once he learned it, he couldn't help but smile and laugh at how perfect of a pitchman he is for F.A.S.T.

"It's consistent with who I am," he said.

A version of this column also appeared on Thrive Global.

If you have questions or comments about this story, please email editor@heart.org.

If you have questions or comments about this story, please email editor@heart.org.
To see a great video of his experience go to and scroll to the bottom of:
https://www.heart.org/en/news/2019/05/06/olympic-great-michael-johnson-wants-you-to-think-fast

HEALTH CARE DISCLAIMER: This site and its services do not constitute the practice of medical advice, diagnosis or treatment. Always talk to your health care provider for diagnosis and treatment, including your specific medical needs. If you have or suspect that you have a medical problem or condition, please contact a qualified health care professional immediately. If you are in the United States and experiencing a medical emergency, call 911 or call for emergency medical help immediately.