What Goes On At Camp Anyway - Volunteer Prep

I get asked a lot about what happens at stroke camp. People want to know what we do there. So I thought I’d spend a little time and try to give you a flavor of the things that go on at a typical camp, if there is such a thing as a typical camp.

I want to mention right now that even though we have the word camp in our name we are not sleeping out in tents. So, I guess you could call it luxury camping.  The accommodations we strive to get for the campers are handicap accessible and are what you'd expect from a motel room. Some camps have cabins, some are in lodges, and some have even been in hotels.  Each survivor/caregiver couple has their own private room with a bathroom. We even carry some equipment such as grab bars and toilet seat boosters, if needed, to make rooms more handicap friendly. We also carry an extra wheel chair in case one of those is needed. When you make reservations from home with us we provide a form where you can list any other special needs and we will make sure they are taken care of. 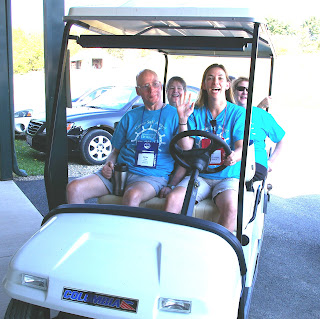 And in those cases where the rooms are not adjoining the activity areas, we provide transportation via golf carts to get you to and from the fun.

For the campers, the camps usually run from 2pm Friday to noon Sunday. On a couple of occasions we have had a four day camp, but that’s not very common. 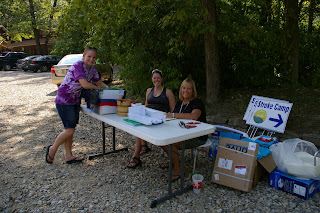 Of course, before the campers begin arriving on site, the staff and volunteers must arrive much earlier for orientation and to set up decorations and banners, signs pointing to the camp, the registration table, tables for all the activities and crafts, set up instruments for the drum circle, and make sure all the sleeping accommodations and assignments are in proper order and the weekend’s meals are scheduled as planned. 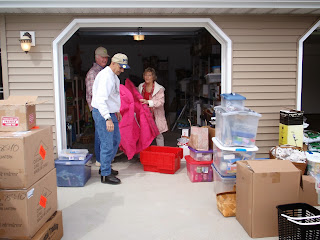 Some volunteers are involved even earlier than that because back at base, in Peoria, Illinois, activity event personnel such as the manicurists, massage therapists, and educational speakers such as doctors and other experts have to be lined up, the craft supplies have to be replenished after the previous camp, the camp van has to be loaded at least a day in advance (and this is a miracle in and of itself to pack three days of camp items in one van), then the van has to be driven to the camp site.

Remember we are headquartered in Peoria, so when we have a camp in Miami or Phoenix, for instance, someone has to drive the van to that location, plus a few local, experienced staff members assigned to coordinate the camp on-site, have to make travel arrangements to the camp destination. We’ve even had situations where the van must be packed for two camps. Case in point, the van needed to be packed and driven to Odessa, Texas for a camp there and then driven on to Phoenix for a camp there the following weekend. We’ve also  had two  camps  going  on  the  same  weekend. So you can begin to appreciate our future challenges as we are planning 25 camps a year.