May is
American Stroke Month

The following is from the American Heart Association News:
https://news.heart.org/

He recognized she was in trouble and got her immediate care. Months later, she returned the favor. 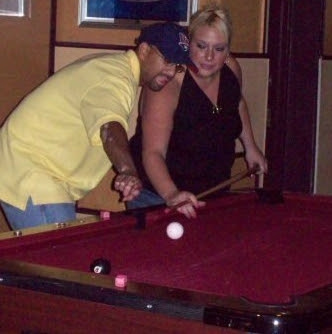 One Friday night, Toni Sferlazzo went out with a friend in Clifton, New Jersey. Toni drove, which meant her pool cue was in the trunk.
A guy named Rich challenged her to a game. She went to her car, got the cue and … it hardly helped.
“I’m OK,” Toni said. “He’s fantastic.”
She got revenge by refusing to give Rich her phone number. Days later, she was still thinking about him; she didn’t even know his last name. So she returned the next Friday. Rich Guzman was there, carrying a new cue still in the wrapper.
“If you beat me, you can have this,” he said.
As Toni lined up a bank shot, Rich stood by her, guiding her. He told her she was going to make it – “Trust me,” he added – and she did. They’ve been there for each other ever since.
May 7 is their seventh anniversary, and it’s especially significant because of how much they’ve been there for each other over the past year.
Like last January, when Toni suffered a stroke.
And December, when Rich suffered a heart attack.
“We are each other’s angels,” she said. 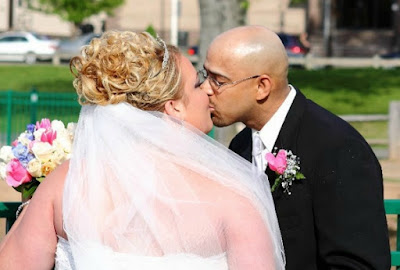 Toni was at work, coordinating 11 drivers for a waste management company, when her right arm felt funny. It seemed like a flare-up of carpal tunnel syndrome, except her arm was more numb than tingly.
“I lifted my arm and it flopped on my desk like a falling brick,” she said.
Days later, a stroll across the office went haywire; she zigzagged. She blamed it on an insulin imbalance because of her Type 2 diabetes.
The next day, Rich was making dinner when he heard Toni say something that sounded slurred. He turned to look at her and said, “Your mouth – it’s drooping.”
Rich immediately put her into the car and navigated an ice storm to get to the hospital. In retrospect, he should’ve called an ambulance. Doing so would’ve meant saying into the phone a word he wasn’t ready for Toni to hear.
It came out at the ER when he said, “I think my wife is having a stroke.”
***
An ambulance also likely would’ve taken them to a hospital capable of handling stroke patients. While this facility was equipped for testing, it lacked an on-site neurologist. Instead, Toni had a telestroke consultation.
A neurologist elsewhere received the test results. Using a two-way video, the doctor asked Toni to raise her arms, then to smile, then to get out of the bed and walk. Between the exam and the tests, it was clear she’d suffered a stroke.
Further tests turned up good news and bad news: There was no clear source of what caused it.
This is known as a cryptogenic stroke, and it accounts for 25 to 30 percent of all strokes. She now takes aspirin and other medicines to help prevent a second stroke. Doctors later implanted a device to help monitor her heart’s electrical activity.
“Not knowing what caused my stroke is not comfortable,” she said. “But I feel very protected.”
Toni’s short-term memory isn’t as sharp as before. Once a proficient multi-tasker, she now jots things on sticky notes so she can focus on one thing at a time.
Her right hand remains weak. She’s a lefty, so it’s more of a frustration than an obstacle. However, there is one thing she misses.
“I can’t play pool anymore,” she said.
***
A long, difficult 2017 was finally ending. On the year’s final workday, Rich and some buddies went to celebrate.
Toni hadn’t hung out with that group in a while. Something told her this was a good time to join them.
As the evening wrapped up, Toni offered one of the women a ride home. They got into her car while Rich got into his truck.
Toni couldn’t move her car until Rich moved his truck. And he wasn’t moving.
“What he’s doing?” she grumbled.
Then Rich got out, clutching his chest. He opened the back door of Toni’s car, rolled in and said, “Take me to the hospital.”
An artery in Rich’s heart was 100 percent blocked.
Rich was rushed into the catheterization lab. A doctor inserted two stents to clear the blockage and prop open the artery.
“The doctor came out, gave me a big hug and said, `Your husband is going to be fine,’” she said.
***
Some people might’ve responded to back-to-back crises by wondering what will go wrong next. Toni and Rich are working to make sure nothing else goes wrong.
They’ve overhauled their lifestyle, starting with eating healthier. Their new Sunday morning routine is working out together. Many workdays Toni finds herself looking forward to putting on her workout gear and getting in a good sweat.
“God gave you one body to live in. Make it a happy home,” she said. “We can’t control everything, but we can do things to the best of our ability to not make life shorter.” 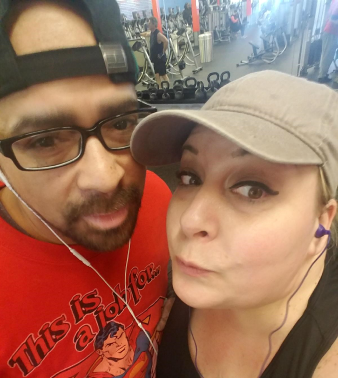