The following is from our camp's October/November Newsletter.In this newsletter we will hear from Larry Schaer, Associate Director, who is sitting in the "directors" chair this issue.

Today I want to share an observation with all of you. As the Associate Director of Retreat & Refresh Stroke Camp I have the privilege of meeting hundreds of people across the country through stroke camps and Strike Out Stroke events. It is truly amazing to see people taking the initiative to educate and support stroke survivors in their respective communities. Little did we know the decision to take stroke camp "on the road" would have such an impact in communities across the country.

In 2007, we made a decision to create a national network of stroke camps. Today we see the fruit of that decision where survivors, caregivers, family members, sponsors and volunteers are making a positive difference in their own communities. It is not unusual to see fundraisers, 5th grade education classes, Strike Out Stroke events across the country. For example, a couple of camp volunteers have planned an event, dancing with the docs, to raise funds for multiple camps in the Phoenix area. A Denver stroke survivor created his own non-profit organization tt,,at provides cycling and snowboarding opportunities for stroke survivors {see related article in this newsletter). A California stroke survivor planned and conducted her own Strike Out Stroke in her community.

The common denominator in these stories is the fact that all of them have participated in one of our stroke camps. It is our belief there are many stories where ordinary people are making miracles that are improving the quality of life in their communities. If you have a story we would like to hear it. If you'd like to send your story, just forward it to us at info@strokecamp.org. Want to call us, the number is 309-688-5450.
------- 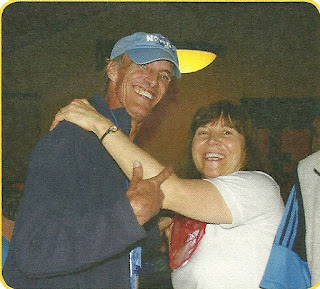 It happened the morning of August 2, 1983, twenty-four days before my 30th birthday and I was living the American dream. I had a beautiful wife; we had our first daughter, born in July. We had a house, cars, money in savings and I was in the process of starting my own business. Life was good, but on that day while spending the afternoon with my in-laws, I had my first stroke. My future was to include seven strokes within three and a half years.

By my fifth stroke my doctor told me to go visit with a psychologist to deal with my own death. He did not know what was causing me to have these cerebral accidents. The test following my sixth stroke led to a diagnoses of my disease, Granulomatous Angiitis known now as Isolated Angiitis of the Central Nervous System.

It was between my fifth and sixth strokes that a close friend of mine invited me to go skiing. We had ski raced in our high school years, and after, until my first stroke. This day of skiing was the first time since this whole ordeal had begun, no doctors, no appointments, no hospital stays, nothing but skiing. This would have a profound effect on my future, right up to today.

After my seventh stroke, there were problems and challenges in the ER and I was feeling down and sorry for myself. The morning of the third day I thought to myself  "this is not doing me a damn a bit of good." I went to the speech rehab center and held up my note "teach me how to speak." My rehab button was on again!